Everyone is speculating on how the Fed will move on interest rates this month and most analysts and market participants believe that, especially with this morning’s positive US employment report, that the Fed will almost certainly move to raise rates.

However, what most people do not realize is that news, events, and fundamentals do not actually move the markets!

Not convinced? Let’s go back and take a look at how the markets reacted to the Fed’s September meeting.

At the beginning of September, here is how our Master Market Forecast told us the US equity markets will behave during that month. 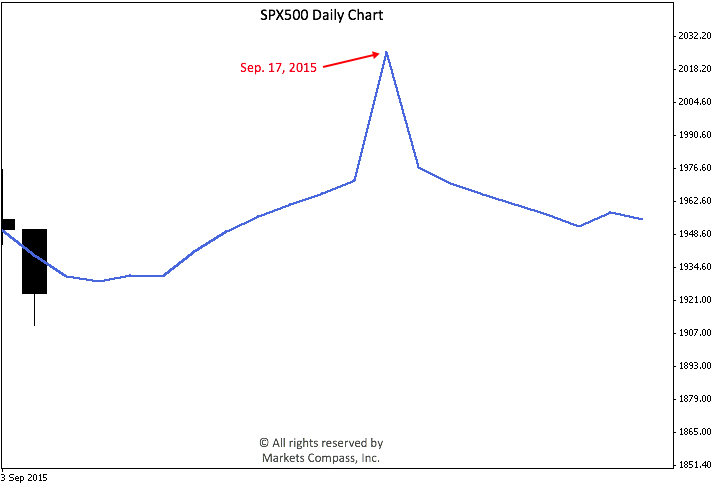 According to the forecast, US equities were to bottom out in early September then rally through the Fed meeting on Sep. 16th/17th, and then on the exact day of the announcement, they were expected to spike up then reverse their trend! That was the story for the whole month, as simple as that!

Now, keep in mind that this snapshot was taken in early September, long before the Fed were to meet.

Had you reasoned using fundamentals with this picture in front of you in early September, you would have most probably bet that the Fed would be raising interest rates in their upcoming meeting; otherwise why would the markets spike exactly on Sep. 17th then tank through the rest of the month?!

But we all know what actually happened on Sep. 17th… The Fed announced that they were leaving interest rates unchanged, which was supposed to be a good thing for equity markets. Right?!

As a matter of fact, equities did initially have a good rally when the announcement first came out, but then the markets suddenly reversed their direction when market participants changed their perceptions of that news. They, all of sudden, started thinking that the Fed must have refrained from raising rates because the economy was not strong enough to withstand even the slightest interest rate increase at the time. That sudden change in perception is exactly what caused the reversal and that spike that our forecast had predicted weeks in advance, exact to the day!

Here is what the market did in that month. 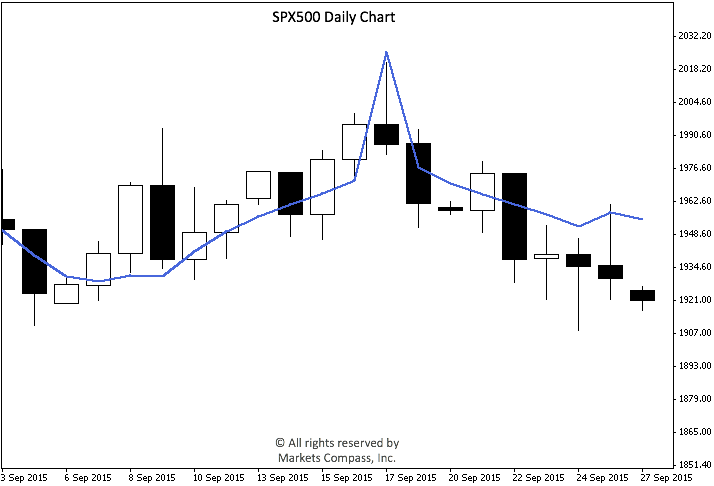 Notice how the actual market behavior turned out to be contrary to what economic fundamentals called for?!

So, our point is that it really makes no difference what decision the Fed ends up making in a couple of week’s time because the markets will behave the way they should behave, regardless! And our forecast tells us how exactly the markets should behave.

So, what we will do now is to let you in on a little secret!

Below is what our Master Market Forecast tells us will happen the week the Fed will be meeting next week based on our TR Model. 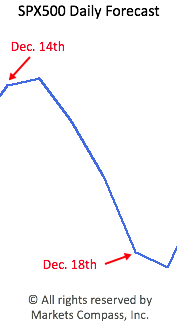 The US equity markets should be coming off a high on Monday Dec. 14th and are expected to drop through the Fed meeting on Dec. 15th/16th to close lower for the week. This is how the markets are expected to behave according to our TR Model regardless of what decision the Fed will end up making that week.

The moral of the story is that if you know with a relatively high degree of certainty where the markets will head next, you no longer need to speculate on news, events, or even fundamentals!

There you have it!